9 Reasons Achieving Goals Can Be Difficult 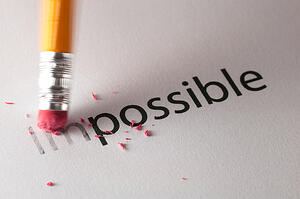 What would you say if we asked you to identify a few of your goals? I’m sure you would have no problem rambling off a list of at least 10, maybe even 20 goals you have on the tip of your tongue. I would also bet these goals range from short-term to long-term and from life goals to career goals. You have also probably have had these goals for different amounts of times. Do you come up with new goals every week? Everyday?

What about those goals that have tormented you for years? You know the ones I mean. You think about them constantly, but they still seem unobtainable after all this time. It can be frustrating or even difficult to admit but until you are ready to come face to face with this bit of reality you will never be able to achieve these goals.

Setting goals is much easier than achieving goals, but there’s no secret to why it’s difficult at times. In this blog post we are going to talk about nine reasons why it can be difficult to achieve certain goals and what you can do to fix it!

Setting a goal does not mean that you have committed mentally to accomplishing this goal. In fact, some would say commitment begins when you start acting, so just thinking about it might not be good enough.

Instead do some research, if necessary, and start thinking about the tasks that you need to accomplish in order to achieve your goal. Your daily life is busy, I totally understand! Because of everything that you cram into your day, between work, family and social life, it is easy for certain goals to get pushed to the wayside. And while it’s virtually impossible to say this isn’t going to happen, being aware of this happening is the first step in committing to achieving your goal. Try setting aside a few hours a week to work towards a particular goal and before you know it you’ll be halfway there and fully committed.

All goals begin with a dream, but it needs to be more than this in order for you to think of it as a goal you are going to achieve.

When our brain thinks about goals we often focus on the positive, the fantasy, or we dwell on the negative, all the things that can go wrong and everything that you hate about your current situation.

Instead of focusing on one or other, try comparing the two in your mind. First, think of the positive aspect you hope to achieve, than compare it to the negative aspect or the reality. This type of cognitive dissonance will give the brain a reality check and force you to think about whether or not your goal can be achieved. Once you get past this critical step you can effectively start thinking about ways that you can make these changes happen.

3. Focusing too Heavily on the Result

It’s easier to think about the result, but it also can increase your anxiety level about actually accomplishing the goal. If you are just thinking about the result it can be difficult to imagine the goal being achieved because you aren’t seeing the steps needed to do this.

Instead stay task focused. Think about the process, break it down into tasks and look at those tasks as mini-goals. Not only will it reduce your anxiety levels, but it will also allow you to focus the necessary attention on the process.

So here’s a broad, scientific answer: when your brain thinks about a goal it focuses on the worst aspects of achieving this goal.

And how do we alter this way of thinking? Russian psychologist, Bluma Zeigarrik, revealed the brain was two times as likely to recall a task that was partially finished than a task that had not been started or was completed. This means that just starting a task, even though it may not be something we can complete right away, is a positive step towards finishing it. It may even shift the way your brain thinks and force you to realize it’s not as bad as you thought it was going to be.

5. Retaining Goals You Are So Over!

I know you have always been taught never to give up or that you should finish what you started. While that might be true in some cases it’s not the case in every situation. You're human; you lose interest in things and gain interest in new things. It’s perfectly okay to change your mind or realize something isn’t for you after all.

Reevaluate your goals often to make sure they are still things that you want. If they’re not, stop working towards them. After all, I’m sure you have a laundry list of other goals that you can devote your time to, so why keep focusing on old goals you are no longer interested in?

Let’s not confuse long-term goals with unobtainable goals. By unobtainable I mean it’s never going to happen, not because you aren’t working hard enough, but because it’s not possible, no matter what you do. You are never going to ride a unicorn, but you might become the CEO of your company even if you currently hold an entry-level position.

Long-term goals are great and breaking them up into smaller tasks can make them seem more obtainable. These smaller tasks will keep you on track and will help you to achieve your larger goals later down the road.

Goals are hard to achieve and understanding they don’t happen overnight is imperative to not getting discouraged. Before you begin working toward your goal think logically about how long you can expect it to take. Be realistic about this and don’t set the bar too high or too low. If it’s too high you will be more likely to give up because it’s too hard. If it’s too low you won’t feel as accomplished when you achieve it, which will make working towards goals in the future not as motivating.

Ask yourself, why am I trying to achieve this goal? If the answer sounds something like, my boss wants me to or I’m supposed to even though I think it’s stupid, you might as well give up now. That might sound like a terrible thing to say, but it’s true. In order to achieve your goals you need to be self-motivated and own your goal.

So instead of thinking of it as something you have to do or someone else’s goal, think about what you will get out of it and focus on that as your goal. Maybe you don’t feel like re-coding a 20 page website but if you do you will be one step closer to achieving the promotion you have been working towards. By focusing on that as your goal and the re-coding as a task to accomplishing your goal you will be able to self-motivate yourself and feel better while you are doing it.

9. You’re Not Celebrating Your Success

In the beginning of this blog post I asked you what your current goals are. Now I’m going to ask you what goals you have successfully accomplished in the past year. If you find this question harder to answer than the first, don’t worry you are not alone. We are such a goal driven society it’s easy to move onto the next goal after you’ve achieved something without taking the time to celebrate your success. But you earned it.

You’ve worked hard to achieve your goals, so the next time you accomplish something pause, reflect and be proud of yourself and all your hard work. Think about all the goals, big and small, you have accomplished in the past few months and give yourself a pat on the back for all your achievements thus far. Trust me, you have earned it!

February 5, 2018 3 Reasons Why Email Development Can Be a Headache Have you ever opened an email to find a jumble of empty boxes and misaligned...
September 8, 2022 HubSpot’s Latest Features Help Leaders Connect With Customers Like Never Before INBOUND 2022 represents another step forward in HubSpot’s evolution into a...
October 21, 2022 4 Powerful Features in HubSpot Operations Hub (with Use Cases) Powered by the HubSpot CRM, Operations Hub is a data management software that...