Business aviation service provider Clay Lacy's sales teams were operating on multiple platforms. A reorganization of their business presented the opportunity to consolidate their tech stack with the HubSpot Growth Suite.

Over their 50 years of operations, Clay Lacy Aviation has grown to be one of the leading providers of business aviation services in the United States. With a diverse set of service offerings including full-service aircraft management, charter flights, fuel sales and aircraft maintenance, the various Clay Lacy teams found themselves operating on multiple sales platforms. Their disparate tools often presented roadblocks to a cohesive, company-wide sales effort and failed to provide clear visibility into their success.

Additionally, while they had seen great success from their charter flight segment’s inside sales team, Clay Lacy was hoping to create more sustainable recurring revenue from their smaller outside sales team. As they began a reorganization of the segment, Clay Lacy saw an opportunity to start consolidating their tech stack by implementing one tool before rolling it out to the entire organization.

Historically, the charter flight segment of their business operated without an integrated CRM. Some elements of their sales process were maintained in Salesforce, but this tool was not fully integrated with their marketing and communications tactics causing inefficiencies and adoption issues.

After evaluating several tools, Clay Lacy landed on HubSpot Sales Hub as their chosen CRM and marketing platform. Wanting to avoid the challenges they faced implementing Salesforce on their own, they sought out an agency partner to support their project.

One of Clay Lacy’s primary goals was to find an implementation partner who would do more than just push all the right buttons. They were seeking a creative team who could also provide strategic insight, consultation and best practices to support the creation of long-term plans to ensure better adoption and drive maximum value from their investment in HubSpot. With that in mind, Clay Lacy partnered with New Breed to support their implementation of HubSpot Sales Hub.

Working across Clay Lacy’s multiple platforms and their unique product offering presented a number of opportunities for the New Breed team.

Chief among those needs was a custom object to tie to their aircraft (both owned and non-owned) in addition to deals and contacts that had to be translated from Salesforce. While Clay Lacy’s development team coded the custom object through HubSpot’s API, New Breed managed the creation of its properties — such as tail number and client — and associations with standard objects within Clay Lacy’s portal.

To do so, our team leveraged an entity–relationship diagram using crow’s foot notation to visualize the object’s one-to-many relationships. The diagram indicated primary and secondary values for the aircraft object and how it would associate with multiple deals, contacts or company records. This document would inform how New Breed implemented and created the object with HubSpot. 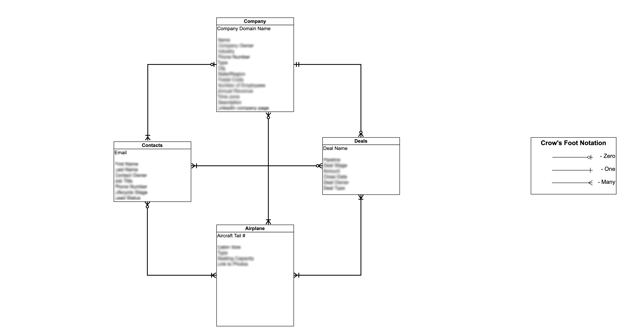 To meet their unique business needs, New Breed needed to develop some workarounds. For instance, HubSpot workflows involving two objects traditionally only trigger once, but Clay Lacy required consistent automation between properties on their aircraft and deal objects.

For example, whenever a deal reached a certain stage, properties for aircraft automatically updated. This then told the aircraft object to populate its ownership down to all of its associated deals, enabling consistent automation.

In addition to the creation of a custom object to ensure smooth data transfer, our team provided strategic guidance and consultation on how to integrate the third-party tools Clay Lacy uses to manage their charter fleet and finances into HubSpot. Having these platforms communicate and integrate with one another was an important element to ensure long-term success with HubSpot for Clay Lacy.

Throughout the implementation process, Clay Lacy also utilized other third-party tools to support their sales process. During weekly check-ins with the team, Clay Lacy expressed greater interest in maximizing their HubSpot usage, and the project pivoted toward the creation of more sales enablement tools within their portal

In the interest of supporting their sales team and accelerating deals, our team automated lead routing and created a queue of tasks for each stage of their newly defined pipeline within HubSpot. These tasks not only standardized their sales process across teams, but provided clear actions to sales reps to help progress deals and quickly communicate with clients.

Following the implementation of HubSpot Sales Hub and the creation of additional tools within their portal, New Breed provided support to promote adoption and use of the tool to the charter flight segment.

In addition to holding training sessions, our team provided step-by-step instructional videos that explain how to perform various tasks and functions within the portal that are relevant specifically to the sales team. Additionally, we provided regular updates and more in-depth training videos to the operations arm of Clay Lacy to ensure a smooth handoff and efficient management of their HubSpot instance.

While still in the early stages of their use with HubSpot, Clay Lacy has already felt the impact of the robust implementation and operational support from New Breed.

As a strategic partner and consultant, our team was able to provide recommendations to Clay Lacy that required both parties to pivot their focus toward driving more immediate value and addressing Clay Lacy’s greatest needs of the moment, such as routing automation, and drive more immediate value.

By implementing Marketing as well as Sales Hub to track marketing activities, newly defined pipeline stages and a refreshed sales process, New Breed was able to provide greater visibility into Clay Lacy's overall performance. The creation of automated tasks to support their sales process has helped accelerate Clay Lacy’s deal pipeline and unify their sales team onto one coherent platform.

“To be able to communicate effectively across teams and have more transparency on deals [...] there are some fireworks that are starting to go off for some people,” says Austin Borkoski, sales operations manager at Clay Lacy. “We now have a great foundation and we know that it works.”

What started as a migration from Salesforce to HubSpot became much more. While offering strategic insight and consultation was an important element of our partnership, creating sales enablement tools became a greater priority once the implementation was well underway.

“The flexibility that New Breed has brought to the table has been amazing. [New Breed] completely digested and supported on important pieces we didn’t even realize we needed until we were halfway through, which made it really easy for us to just continue to make progress,” says Austin.

At New Breed, implementing HubSpot is more than just getting a portal up and running. Our team strives to provide strategic guidance and tailor the platform to an organization’s unique goals.

Hit the ground running with your HubSpot portal and drive results 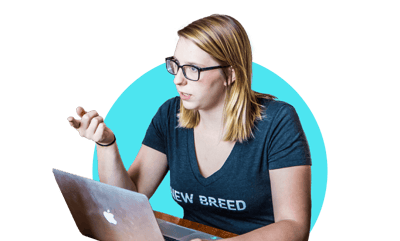